After rehabbing from a biceps rupture, a firefighter’s passion burns on. 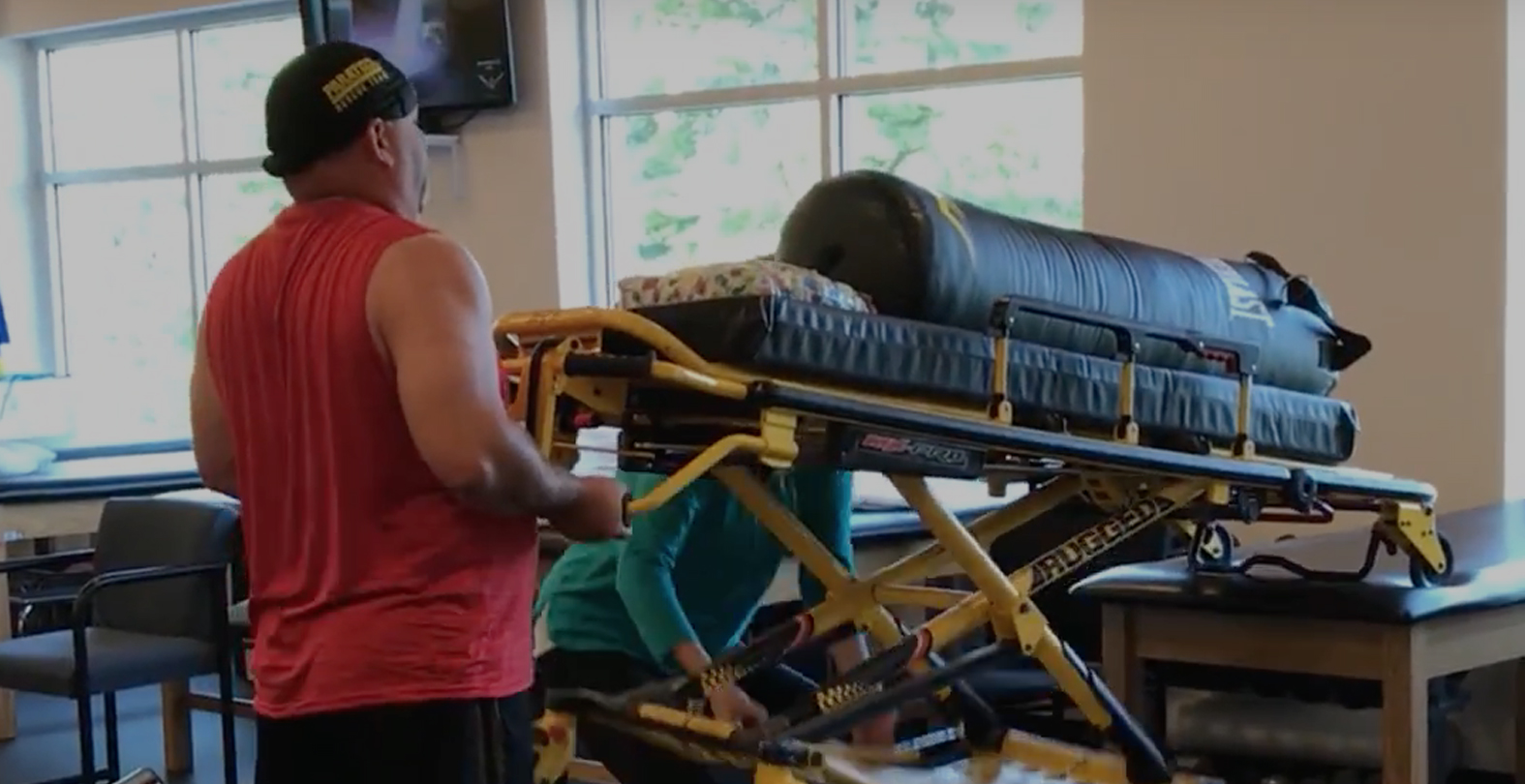 For all the risks you might associate with decades as a firefighter, it was a seemingly innocuous incident at shift change in his Arlington, Va., fire house that put Ralph Parsons’ career in jeopardy.

Two days after Christmas in 2016, Parsons was performing his normal morning checks. As he attempted to climb into a parked fire truck, his foot missed a step. He caught himself by grabbing a hand rail.

He immediately felt pain but dismissed it as just a pulled muscle. Returning from a call that came in right after his accident, Parsons was hurting so badly that he couldn’t get his coat off without assistance. He rolled up his shirt sleeve to discover that his arm from the elbow up was no bigger than his wrist.

By his shoulder was a mass balled-up like a fist. His biceps muscle had torn free from his elbow and rolled up in his arm.

Parsons wouldn’t work again for eight months. If there was a silver lining it was that Parsons, who is right-handed, had suffered the injury to his left arm.

What a skilled PT knows

For Parsons, the burning passion for his chosen profession came early in life, in Petersburg, Huntingdon County, a little town in central Pennsylvania where his father was fire chief.

“Just grew up with it,” Parsons said. “It was always a part of our life.”

Starting as a volunteer firefighter at age 16, Parsons moved to the Harrisburg area after high school to study fire science at Harrisburg Area Community College. By running calls for a local fire company, he earned free room and board at the firehouse.

He spent nearly 10 years as an EMT for an ambulance service near Harrisburg before joining the Arlington County Fire Department in northern Virginia. Such is Parsons’ devotion that he endures a two-hour commute to work from his Pennsylvania home.

An MRI revealed a full tear, for which a surgical repair was the only remedy. His orthopedic surgeon noted the urgency as every day the torn muscle wasn’t used would require three additional days of rehabilitation.

A little more than a week after his operation and a follow-up appointment with his surgeon, he began rehabilitating with Arlington Physical Therapy & Sports Medicine near Harrisburg (the clinic is not associated with the Arlington fire department). Parsons worked with physical therapist Kelly Clancy and physical therapist assistant Lauren Robertson.

He described the first few weeks as “frustrating as hell” given that he couldn’t do anything for himself: his therapists moved his reconstructed arm for him to ensure safety. Clancy described the first 10 to 16 weeks after surgery as a “protective phase” during which the focus is on range of motion and flexibility.

A skilled PT, she said, knows how far to push without causing any damage. Rehab focused on Parsons’ shoulder range of motion and hand strength so that when they were ready to strengthen the surgically repaired biceps he wouldn’t have atrophied elsewhere.

She said Parsons was “super-compliant” despite the tedium involved with eight to nine months of therapy and time away from his job and firehouse family.

“That was definitely mentally taxing for him,” she said.

At one point Parsons had progressed to curling a one-pound dumbbell – a pink one, at that – on his own while an 80-year-old woman near him was rehabbing with a 10-pound weight.

“This is really embarrassing,” Parsons recalled thinking. “This is horrible.”

Fear was a factor, too. Parsons wondered whether he would get full range of motion and full strength back. The long road to recovery would get more challenging – but with more tangible signs of success – as spring gave way to summer.

In mid-June, Parsons transitioned to a work conditioning program designed to resemble his actual job duties. Four hours per day, five days per week, Parsons’ therapists put him through his paces.

He was so exhausted after the first few days, he said, that he began making a sandwich in the morning, knowing that he wouldn’t have the strength to make it when he got home from therapy.

He went from carrying a small section of hose and taking off and putting on his gear to climbing a ladder and pounding a tire to simulate the challenge of chopping a hole in a burning roof. Lifting a gurney with a boxing heavy bag on it allowed Parsons to re-create the act of putting a patient and cot into an ambulance.

Parsons returned to work on Aug. 28, 2017. He said he probably was in better shape than when he had left. His left arm sometimes aches in cold weather, but he is reluctant to attribute it to his torn biceps. It could be arthritis that he would have gotten anyway, he figures.

Parsons said he gained a new perspective on injuries knowing how little it took for his to occur. As for his rehab, he said patients get out of PT what they put into it. But he’s also thankful for the assist he received from his therapists.

The week that he marked one year back on the job, he treated the Arlington Physical Therapy staff to a six-foot sub for lunch. He had spent so much time at the clinic for his therapy that he felt like part of the staff, even changing the bottle on the water cooler.

“They certainly made me feel like family,” he said.